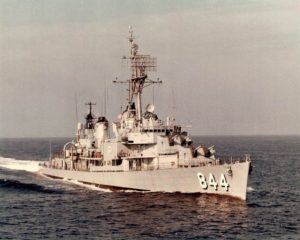 The fourth PERRY (DD-844) was launched at Bath, Maine, on 25 October 1945 and commissioned on 17 January 1946. Her first overseas deployment was an eight-month cruise to Northern Europe and the Mediterranean where she patrolled the Adriatic and Aegean Seas and the Dardanelles, visiting fifty-eight cities in twenty-two countries. Returning to Newport in March 1947, she conducted local operations and exercises from Puerto Rico to Canada and served as an engineering school ship for the destroyer forces of the Atlantic Fleet. In October 1947, her crew assisted in fighting a devastating fire at a resort on Mt. Desert Island, Maine.

She remained in the Western Atlantic until January 1951 when she again got underway for the Mediterranean operations and exercises with the British Home Fleet. In May, she returned to New England and plane guard duties, local operations, and training exercises. In 1952, following her third Mediterranean tour, she again served as an engineering school ship and participated in exercises with the Atlantic Fleet and NATO forces. She served as a gunnery school ship for six months in 1954 and over the next four years regularly deployed to the Mediterranean where she patrolled off the Suez Canal during the mounting crisis between the Arabs and Israelis.

Between 29 April 1959 and 10 May 1960, the PERRY underwent Fleet Rehabilitation and Modernization (FRAM) Mark I conversion, the first such conversion, which was completed at the Boston Naval Shipyard. She was stripped clear to the main deck and rebuilt with a new aluminum superstructure. All of her machinery was overhauled, her living spaces were improved, and she received the latest in sonar and antisubmarine weaponry, including Antisubmarine Rocket (ASROC) and Drone Antisubmarine Helicopter (DASH) systems. Exercises in the Caribbean followed and in August 1960, she shifted her home port to Mayport, Florida. There she participated in Polaris missile tests in the Atlantic Missile Range and conducted local operations and training cruises. 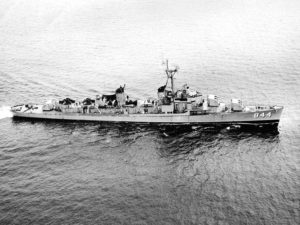 In August 1962, she left Florida for a six-month deployment with the Sixth Fleet, including two months with the Middle East Force in the Red Sea and Persian Gulf. For the next seven years, she rotated between Sixth Fleet and Middle East Force tours and midshipman cruises and other operations in the Western Atlantic. In May 1964, she stood by to assist in the launching of an A3 missile from the DANIEL WEBSTER (SSBN-626) at Cape Kennedy, and in November, took part in Project Gemini recovery operations.

The crisis in the Dominican Republic took the PERRY to the Caribbean in May 1965 for patrol duty with Task Force 124, followed in June by her usual Mediterranean deployment. While participating in exercises in the Caribbean on 6 December 1965, the PERRY was darkened to simulate wartime submarine evasion conditions when she collided with the YORK COUNTY (LST-1175) and left the exercise for San Juan, Puerto Rico, and repairs. In May 1966, she again assumed patrol duties with Task Force 124 off the Dominican Republic.

During 1967, she engaged in local operations out of Mayport, and in March became the school ship for the fleet sonar school at Key West. Exercises in the Caribbean, duty as a sonar school training ship, a midshipman cruise, and NATO exercises took her through 1968. In January 1969, the PERRY got underway for duty in the Western Pacific. In company with the TICONDEROGA (CVA-14), MULLINIX (DD-944), DOUGLAS H. FOX (DD-779), and JOHN W. WEEKS (DD-701), she left Pearl Harbor and after a detour to Guam for minor hull repairs, she arrived at Subic Bay in the Philippines on 28 February. She went on to the Tonkin Gulf and spent the better part of March and April on Yankee Station. On 15 April she got underway Japan, arriving in Yokosuka on 11 May. The PERRY had just four days to ready herself for the thirtieth Annual Black Ship Festival at Shimoda, Japan. Because Commodore Matthew C. Perry opened Japan to trade with the United States, it was fitting for his namesake destroyer to represent the nation at the festival. On 3 September 1969, she returned to Mayport and resumed her duties with the Atlantic Fleet. 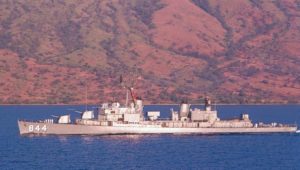 In August 1970, the PERRY and other units of DesRon 14 headed for the Mediterranean, where she screened the SARATOGA (CVA-60) until the Jordanian Crisis required her presence in the Eastern Mediterranean. In November, she was flagship of a special unit that demonstrated U.S. freedom of the seas entering and operating in the Black Sea. At year’s end she operated with the MITSCHER (DDG-35), DAHLGREN (DLG-12), and COLUMBUS (CG-12) screening the carrier INDEPENDENCE (CVA-62). On 25 January 1971, the PERRY rescued a JOHN F. KENNEDY (CVA-67) pilot forced to bail out of his jet plane in the Mediterranean.

She was back in Mayport in March 1971 and two months later got underway for exercises in the Caribbean. An overhaul and refresher training took her into 1972 when she again joined the Seventh Fleet reaching her station off the northern coast of South Vietnam on 14 November and for the next two weeks, provided gunfire support for South Vietnamese forces. Radar and oil pump casualties took her off the gun line until 19 December and she left Vietnam for the last time on 26 December and was soon on her way home. The PERRY was decommissioned and struck from the navy’s lists on 1 July 1973 and was sold for scrap on 24 June 1974.